Live-blogging my Ludum Dare 28 experience. Most recent entries are on top. I’ll plan to post about once an hour (while working). You’ll have to manually refresh the page to get updates. Follow and comment on twitter @velipso. All timestamps in EST.

Jesus… that was close. I finally have a solid game, and I added hash browns. Tentative submission below, assuming I don’t find any bugs:

I have a functioning game!

Sorry for the lack of updates… I am sprinting here towards the end!

Got the title screen done… 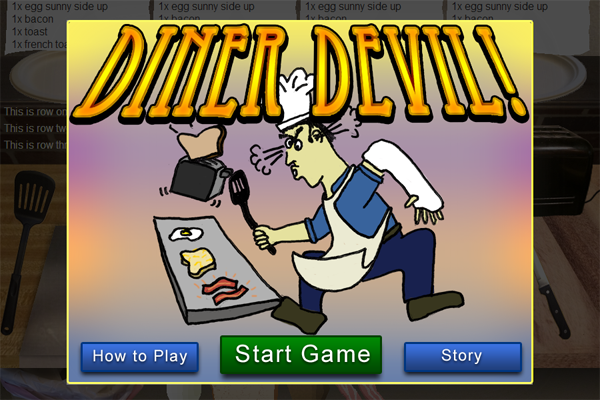 Working on the game logic… nothing to show yet. Check back in an hour.

Preview available here (v10). Have orders displaying, and now you can ship an order out by dragging a plate upward. New plates appear.

Sorry, I was coding away, and missed the 10am update. You can now place items on plates! Plates are never cleared, but the demo does work. Nearly a game!!!

Preview availble here (v8). Skipped the 8am update to finish the french toast. Swapped out the containers at the top with two bowls. The larger bowl can take eggs. Then, dunk bread, and put it on the stove, for french toast!

I am exhausted. I’ve been working on this game all day, for 15.5 hours, with only one half hour break at 5pm. Still not a game yet, but very close. I want to finish adding potato, and then add another veggie (probably onion). Then I can do the plates and orders, and make it a game. Then sound effects. Then, if I have time, more ingredients. I would really like to add batter for pancakes, but I don’t know if I’ll have time. Also, french toast is within reach… if I have enough time!

Last preview for the night (v7). Bacon cooking has been modified, so that the progress bar represents the under-side that is being cooked. Potato can be grabbed, but nothing else yet. 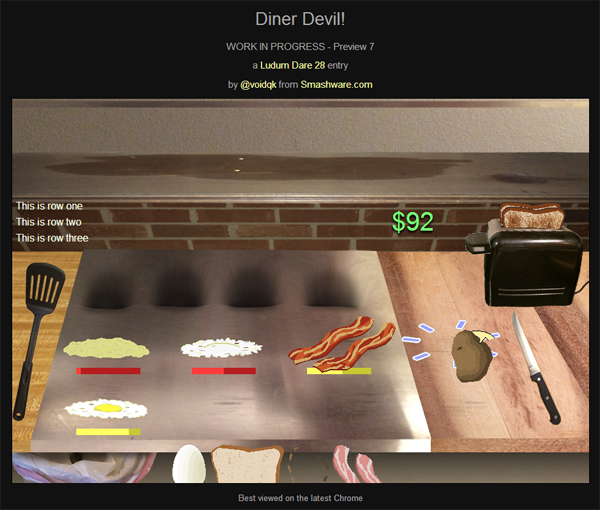 Where did the hour go!?

Preview available here (v6). Cooking bacon seems to work, but might be confusing for the user. You cook the side facing the grill at twice the speed of what you see. Not sure if that makes sense. See you in an hour!

No preview this round… working on getting the toaster working. Should be ready in the next update. Got bread, toast, and burnt toast.

Preview available here (v3). Spatula picks eggs up, drops them off, and allows you to throw eggs out!

Preview available here (v1). No game play yet – just the ability to pick up eggs, crack them on the stove, and throw them out.

Coding core behavior… nothing to show, yet. Check back in an hour.

Got some basic interaction working. Annoying drag/drop behavior that I’m trying to hack my way around. Firefox/Chrome likes to select text when you drag+drop… which I don’t want. Either way, please enjoy my egg animation:

Working on graphics at the moment. I originally thought I’d be doing this Sunday, but oh well. I have very little code written, which makes me a bit scared, but most of the game is just clicking, so I’m only slightly worried at this point. The code should be relatively easy. Most of the work is in graphics and animations, so that’s what I’m doing now. 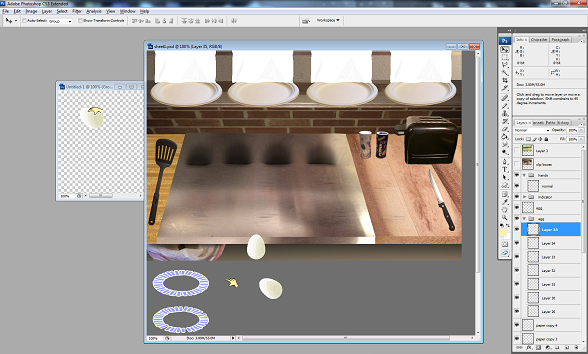 Time is moving slow, and flying at the same time.

Got a lot of the CSS worked out, and the “hot spots” on the main game screen. Mucking with CSS is taking a bit longer than I expected, but I am not worried about time for the most part. I expect to have a functional game by the end of the day. Then I can spend Sunday on improving graphics, music, and building more supporting gameplay. 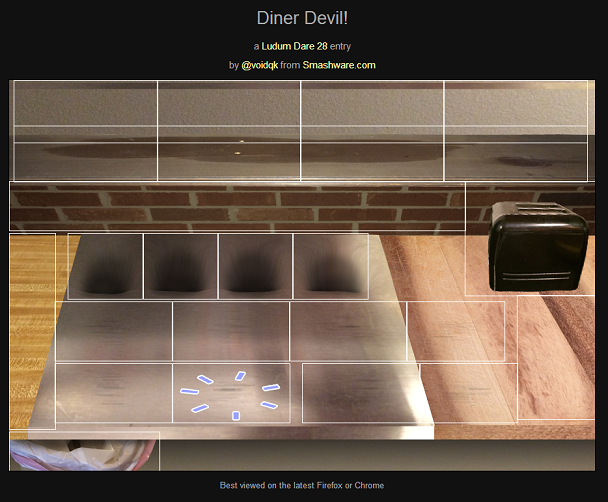 Got an indicator gif, which I’ll overlay on things. I’m actually going to skip canvas entirely, and just use regular div’s, CSS, and JavaScript to make the game. I don’t think I really need canvas for anything complex. This will be a simple clicking game.

Went a little crazy snapping pics of my house. I think I have enough material to use for everything except for the ingredients/animations. This serves as a great base image though, and I’m not sure I could do much better in the limited time. I’m not an artist, so this’ll make do! 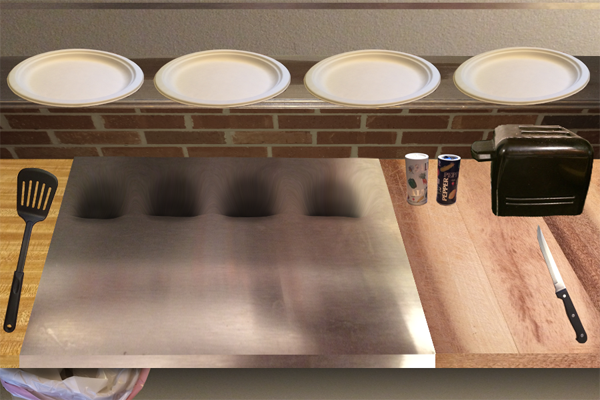 I am awake. Let’s get coding. I’m planning to update once an hour, with shorter posts. For this one, let’s start by cleaning up the art a tad, so it’s actually presentable. I’ll get some help from my own kitchen: 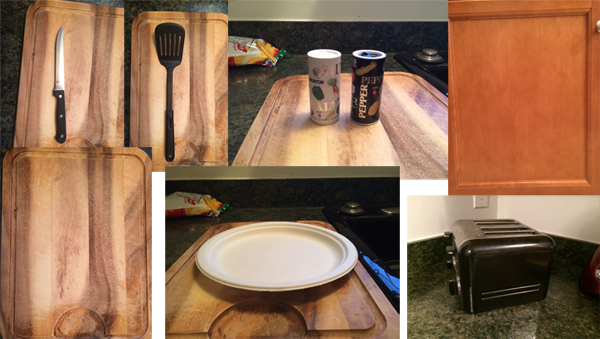 Last update for the night. I have a rough draft of the main game area, scribbled in MS Paint, just to get a feel. I’ll start coding tomorrow morning. Hopefully I can finish all coding Saturday, then I can focus on art/music on Sunday. Click here for full size. 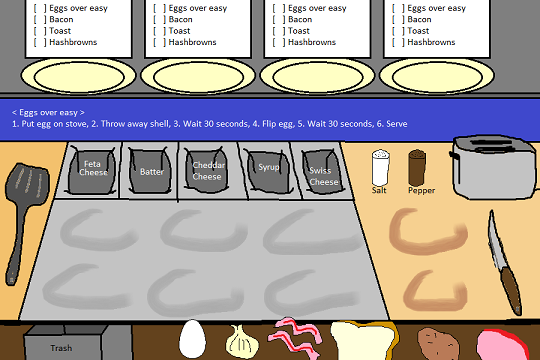 (As a side note, I really feel that deadline suddenly…! Didn’t think I would feel it so soon!)

I’m gravitating towards the cooking idea.

You are a cook, in the first person perspective. You have orders coming in (from the top), and you need to prepare the meals (using your one hand). As you fulfill the orders, they come in faster and faster.

Each level adds more options for things that could be cooked. Let’s say we’re dealing strictly with a diner… perhaps the first two things you know how to cook are eggs over easy, bacon, and toast. You have an infinite supply of eggs, toast, and raw bacon. Orders come in, and you must put the eggs on the stove, toast in the toaster, and assemble meals.

Each passed level means learning one new thing. Perhaps learning how to do french toast. Then scrambled eggs. Then hash browns. Then pancakes. Then omelettes. Then waffles.

This could be pretty fun, I think.

Not so obvious, maybe:

Let’s dig a bit deeper though, and think outside of the gaming realm:

My first thought is being a child, and having your parents give you a choice… grabbing cool toys at a store, and Dad says “you only get one”. The pain, as a child, trying to figure out which toy is the best.

Political: you only get one planet, and do some sort of environmental-awareness type game. Too preachy though, for me.

Random googling brought up “you only get one shot to make a first impression” – reminds me of a job interview. Perhaps a job interview simulator game..? That could be funny.

Reviewing what I’ve written so far, I like the Goundhog Day idea. Have a single day, simulated, with some random events going on. You get one day to try to do as many positive things as you can, to help people out with their problems. Can I build something like that in 47 hours though…? I probably couldn’t even get the graphics completed in the time limit, let alone the logic!

Maybe some sort of arcade game… A leaky dam, and you only have one finger, so you cycle through plugging the appropriate holes, in order to keep the dam in tact..?

Maybe a cooking simulator, and you only have one hand, so you need to manage cooking a meal without burning anything..?

So, I think a clear interpretation is that the user has some sort of disadvantage due to their limited… something. Limited resources, limited time, limited opportunities…

Maybe some sort of planning mode, where the user can position elements on the screen, then they invoke their “one thing” that starts the simulation. The better planning they did, the more successful their something is after it starts.

Maybe more of a sandbox game… You only get one sound at a time. Build a song using some sounds, but you can’t layer any sounds. This might be good, because limitations are great for creativity. Or what if users can choose their own sounds? Maybe they can assemble a song using clips from YouTube videos (0.5 seconds each). Not sure.

How about this… a platformer, but the character is controlled by AI. The user can only place one block, to help the character get through the level. The user must coordinate with the AI to place/remove/place the block in good locations to help the AI. This might be a bit too ambitious.

What would other games look like with “only one”?

Pacman… but only one blue pill.

Tetris… but only one type of block.

Mario… but only one jump per level.

Plants vs. Zombies… but only one plant.

Punch-Out… but only one punch (must dodge most of game to wear them down!).

Mario Kart… but only one lap.

Chess… but only one pawn.

King’s Quest… but only one item in your inventory.

Super Hexagon… but only moving in one direction.

Pinball… but only one paddle.

SimCity… but only one road..?

Baseball… but only one out.

Basketball… first to one.

Soccer/Hockey… only one player (no goalie).

Minecraft… but only one torch.

I’ll try to have a solid idea for my next update, or at least narrow my ideas some. Expect another entry at 11:00PM.

Official theme… You Only Get One.

I will meditate on this, and post my thoughts in a bit.