Live-blogging my Ludum Dare 30 experience. Most recent entries are on top. I’ll plan to post about once an hour (while working). You’ll have to manually refresh the page to get updates. Follow and comment on twitter @velipso. All timestamps in EST.

Fun Ludum Dare, with a great theme! After three weeks of voting, I’ll write up a post-mortem along with my rankings. I also plan on analyzing the results like last time.

Got sound effects and theme music, along with a tutorial. Now, I just need to make three endings, and I’ll be done! 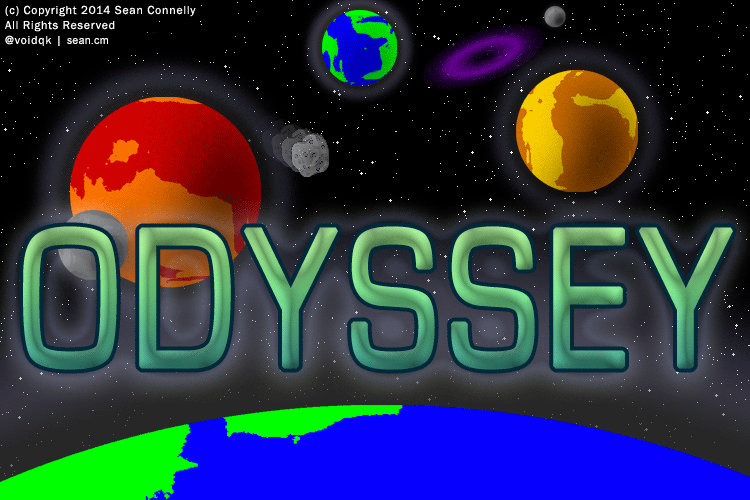 Got a title screen. Starting to feel like a real game, now! Just need music, an ending, and maybe a tutorial level of some sort.

Sound! Also: lower resolution textures if you have a slow computer (like me, in Firefox).

Added another level. It takes me about 45 minutes to create a level. Death also restarts the current level.

Added blackholes, and another level (using a blackhole). Going to bed!

Got camera movement working. Got a basic level editor sort of thing working, with the help of the Chrome Debug tools.

Got ellipse movement working. Planets fly through each other, but that’s fine, because the levels will never have planets hitting each other.

Traversing planets works! Use the same controls as before, but now when you hook into a planet, you land on it!

Got the hook animation working.

Hit A/D to move around the planet.

Hit Space to jump off the planet.

While in the air, click a location to shoot out your hook.

Can’t really do anything… hit space to “jump”, arrows to move the camera, and A/D to rotate the “ship”.

I also made a curve editor, in order to more quickly define interpolation behavior:

Alright, I have an idea. Very simple, action based arcade-like game.

You hit the space bar to jump off your current location, which is tethered. Then, while in mid-air, you click to aim your hookshot. If the hookshot connects with a moon or habitable planet, then your tether is released, and you go to the target location.

You must avoid satellite debris.

Also, asteroids fly through levels, and you can slingshot yourself through them, to get to the next location.

Some planets are deadly and you can’t land on them, but you can still use their moons.

Levels consist of traversing to the target planet. Checkpoints happen when you land on a stable location.

This will primarily be a physics and timing based game, with quick reflexes and trajectory planning required. Perhaps there are powerups in space that you can collect – if I have time (though I probably won’t).

My focus is on the feel of the game, along with nice graphics.

Off to bed, so I can start coding early tomorrow morning!